The Magic that is Scripting

Scripting is planning how things will turn out.

It differs from planning.

Planning says: I will go for a walk at 2pm today

This is more than wishy-washy positive thinking. It can be incredibly powerful if you can develop the right mindset.

Look at this example script: 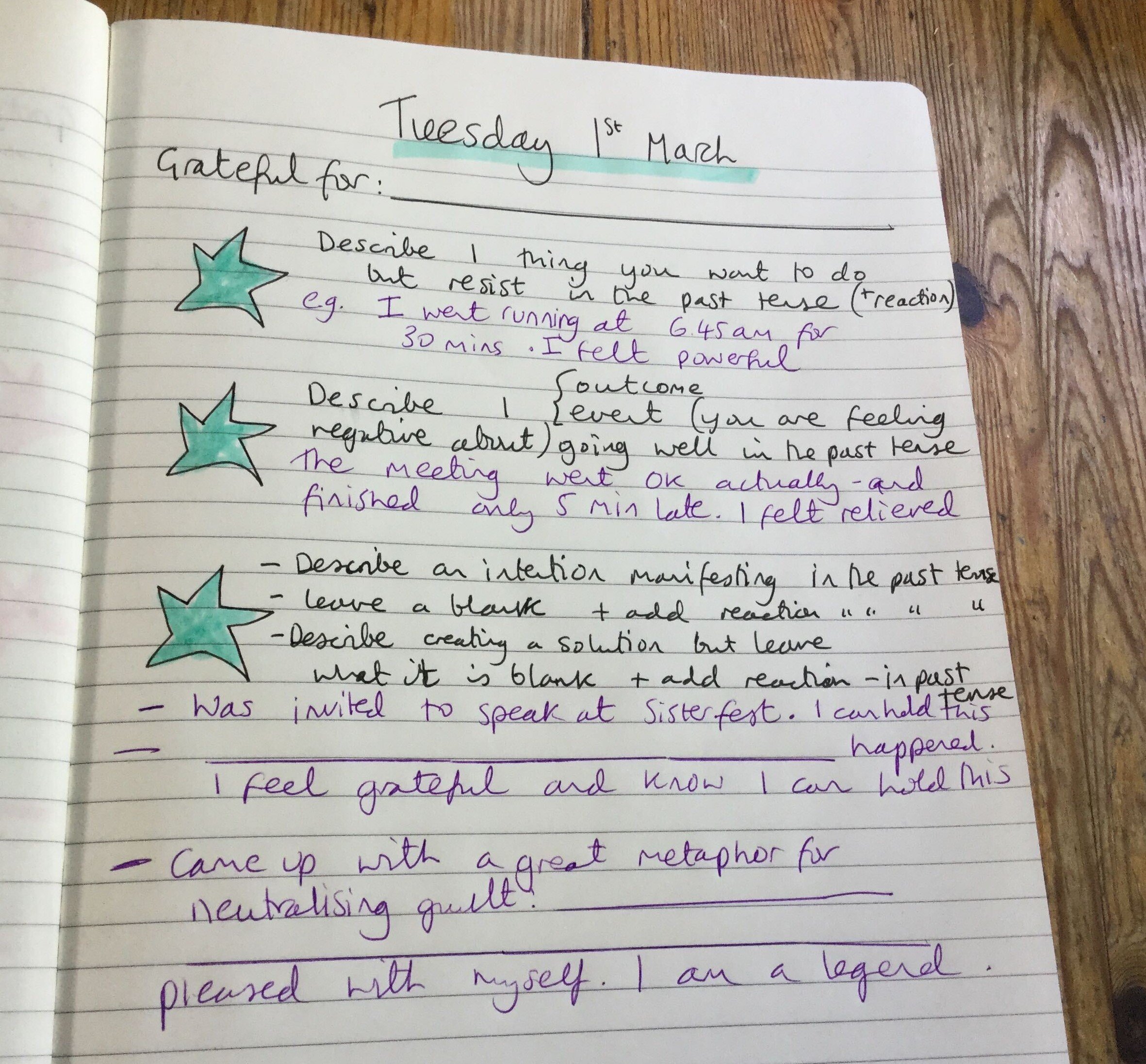 The idea is to script 3 positives for the upcoming day. You can do this the night before or first thing in the morning. I have given 3 types of scripting below. Mix and match - or just do 3 of one type, as suits your needs/beliefs.

Intention Type #1 - to get yourself to do something you resist. You have 100% control over if this happens.

Example is the top sentence about going running: 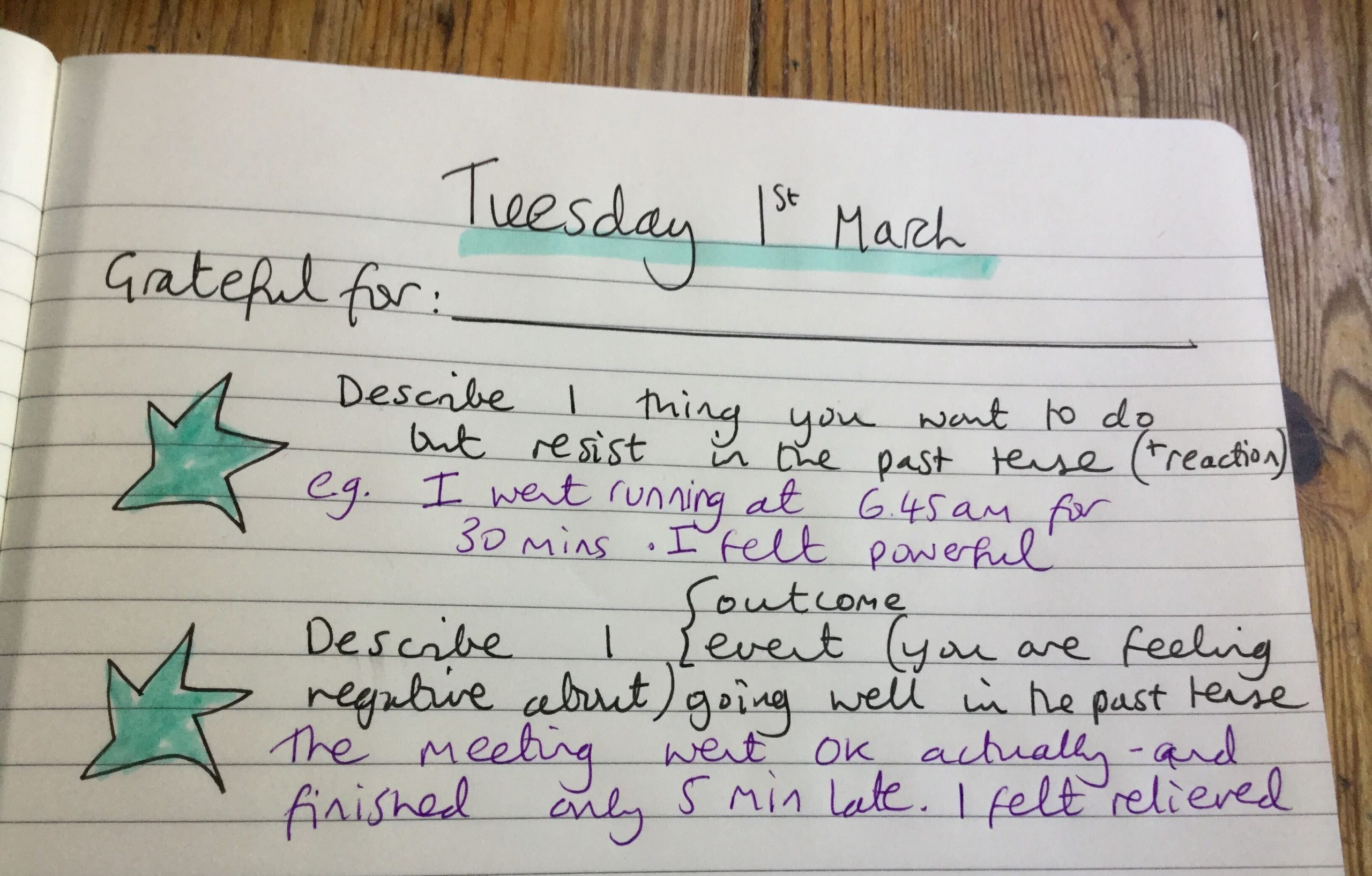 Intention type #2 - a positive outcome about something you would feel negative about. Here you do not usually have 100% control over the outcome.

Example here is sentence  2 about the meeting in the picture above.

Intention type #3: This is less about implementing good habits etc and more about expanding your field of possibility: allowing yourself to have brainwaves, encouraging opportunities etc. 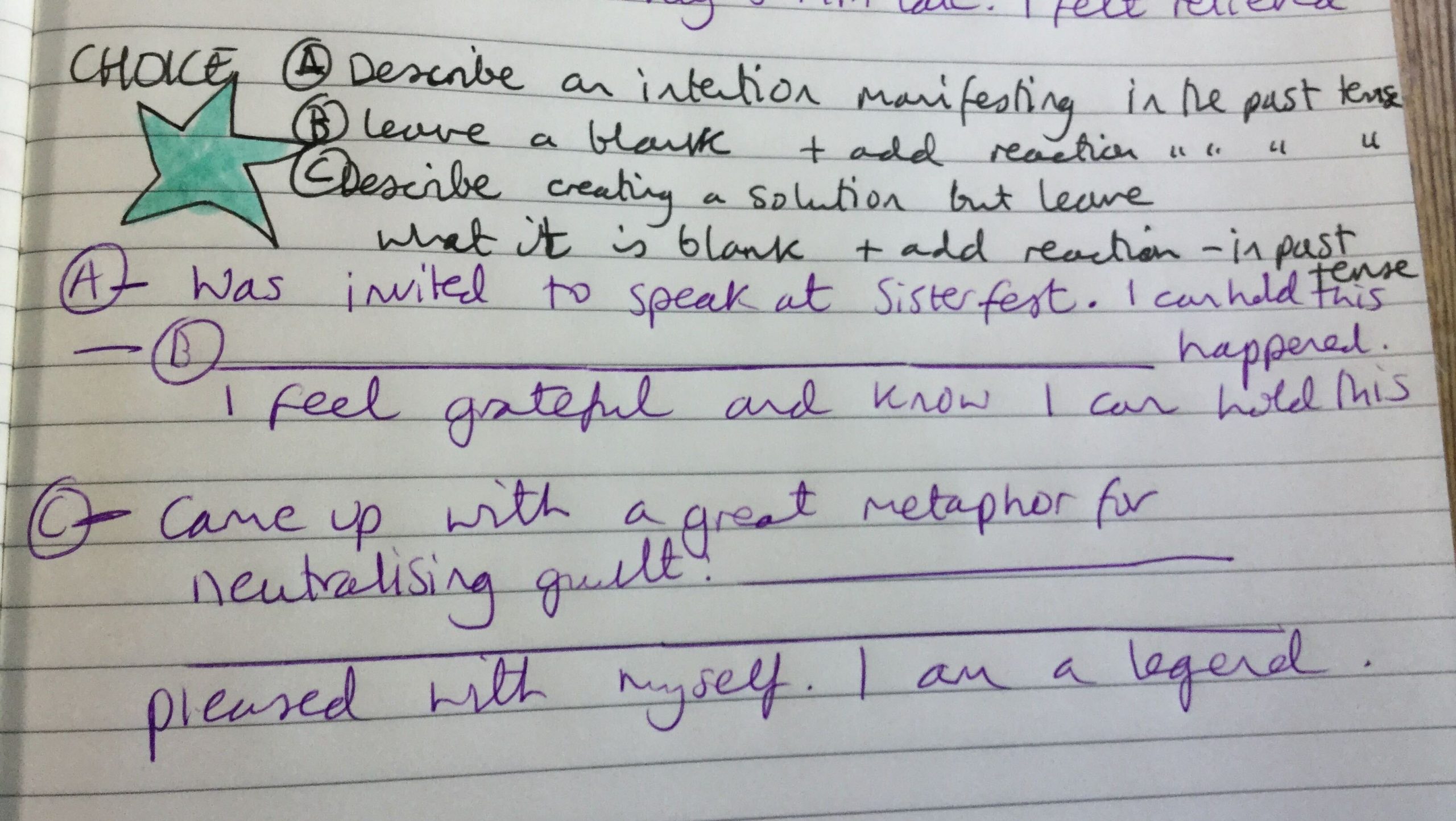 Just choose one of these examples (writing a bit messy in the picture):

A - describe an intention manifesting eg I was invited to speak at a conference. I can hold this.

You can also use your scripting to include menu plans and activity planning.  (If one of your 3 intentions is eactivity, then that istaken care of).

This is optional. Be careful that you do not push your resistance too much or you may rebel. Maybe start with the 3 intentions and add menu planning in later.

Another point to think about is it may suit you to menu plan separately. 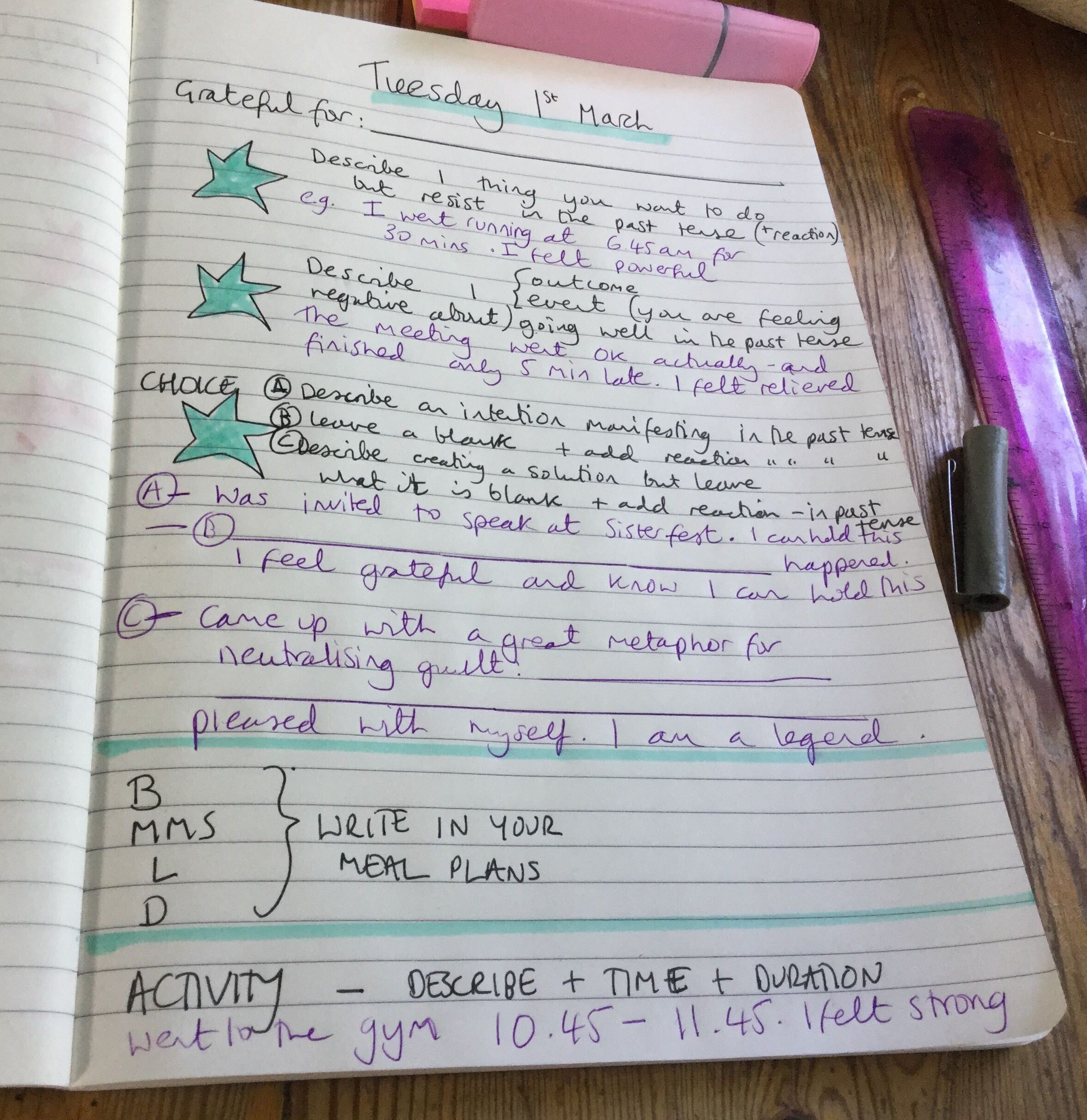 Look over your script and note what actually came true. Not everything will. Do NOT write anything where an intention fails to happen. 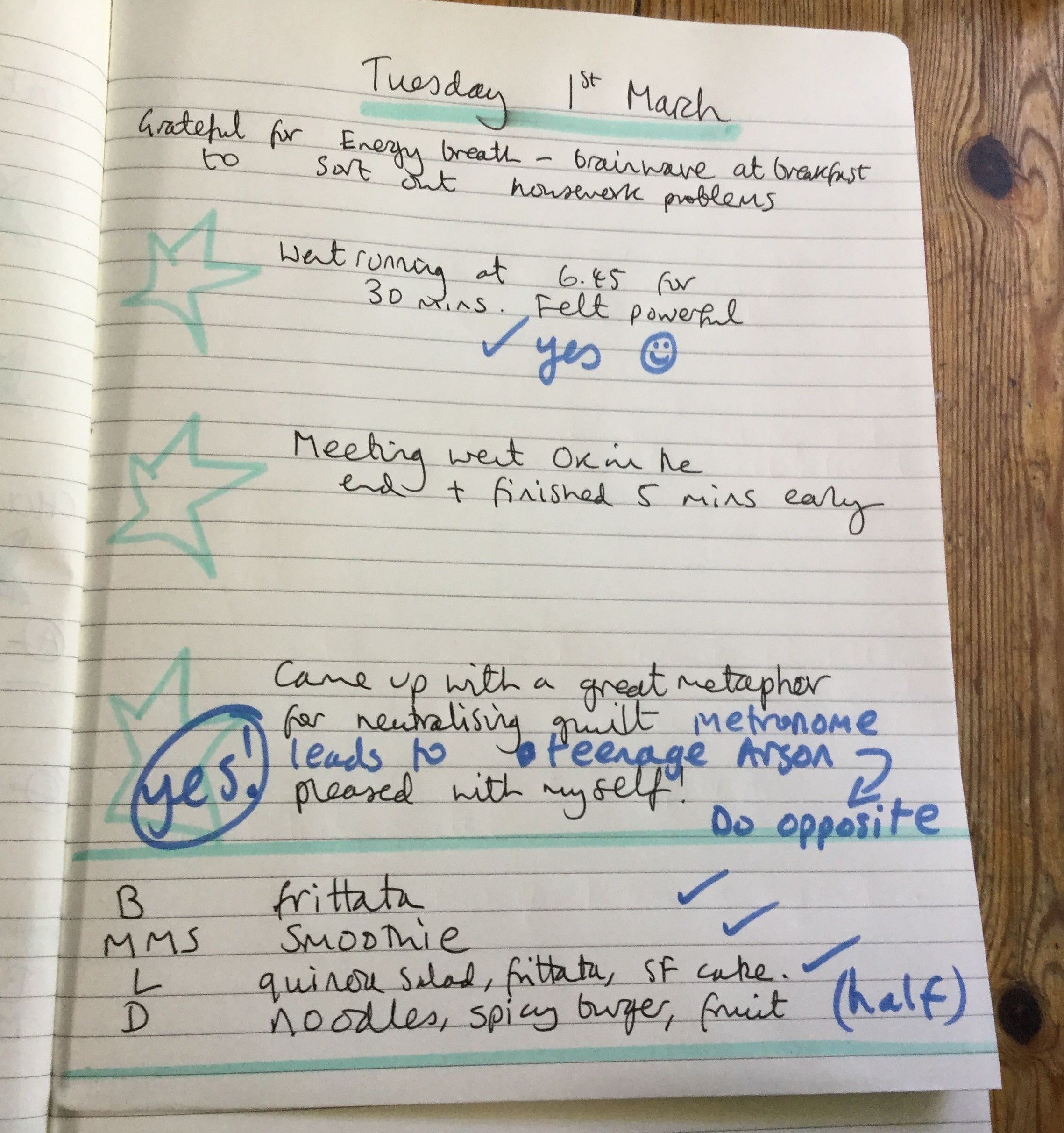 Scripting can be used within whatever belief system you have.

I often find that the things I script happen the next day (happens quite often in lockdown).

Sometimes failure to manifest is not really a failure. Maybe the meeting described above was so overlong that you got the courage up to demand better time management - and THAT was the real benefit of scripting in this instance. Often I am not ready for what I script. Last year I scripted  a mad passionate romantic weekend - even though I was single. That never happened, however that weekend I did start flirting with someone who flirted back. Nothing happened, but a few weeks later something did. So you see the importance of humility in scripting.

It teaches us humility and is a healthy antidote to dreadful perfectionist nonsense like The Secret. At the same time it is the fertile ground you can use to create what often seem like magical changes.

If you have a tendency towards catastrophising and negativity, intention type #2 above is the most powerful way I have found to manage and minimise my own negative thinking.

If you want to get scripting to prove itself to you by trying it for a day or two, don't even bother. That is akin to asking a hammer to show you it works by it independently inserting some nails into the wall, while you put your feet up.

You need to do it regularly and consistently to see results. I do mine after meditation every day.

Generally, scripting to have an insight or satisfy curiosity works very, very well.

Experiment with scripting to draw opportunities to yourself rather than results. An opportunity is the invitation for you to show yourself or life or the universe that you are aligned or aligning with the outcome you desire. If you meet life halfway with your actions, you are far more likely to get results you want.

Scripting Farther In Advance
Once you have tried scripting a day ahead, why not think bigger and do this for next week, next month, or December 31st of this year???

Scripting For Other Goals
This is completely possible. More income, better relationships...the world is your oyster!