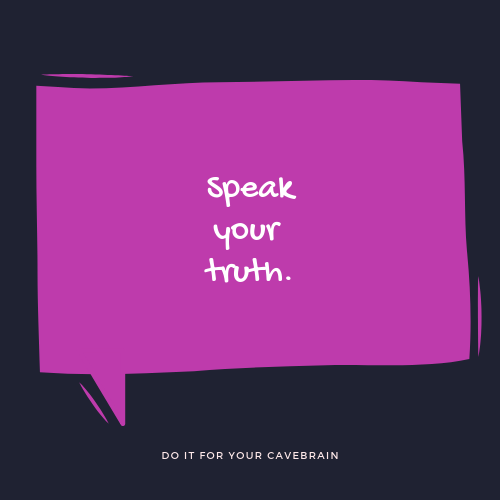 Speaking your truth is probably the quickest, most immediate way you can build a healthy boundary.

Many people censure their truth. Shy away from creating healthy boundaries. Culture loves this. Women, be seen and not heard.  Don’t step out of line.

Meanwhile CaveBrain has a meltdown every time you roll your eyes at some outrageous comment instead of speaking your truth.

*Were absent in some way

*Asked you to carry their emotional baggage in some way

I have a long history of being scared to speak my truth. Over the last decade, I have made big inroads into this fear. However, today it can still tie my stomach into knots of anxiety. Scroll down the page and listen the the audio below about my recent experience with this.

Only you can decide if you should speak your truth and *how* you should speak it - because nobody else can do it for you (Cavebrain won’t buy that). To help you through this process, I have written some of my thoughts down below.

Today's date with yourself will be a bit of a challenge. You are going to speak your truth in some way - or at least prepare to do so.

What do you feel is important to speak up about?

Who do you feel you should call out about their behaviour?

If this challenge scares you, then start with something that your Cavebrain does not perceive to be so risky.

What follows is a step-by-step guide to speaking your truth, and also a audio of an experience I had facing my fears of speaking my truth...and what happened when I faced them.

How To Speak Your Truth

#1 Set Your Expectations At a Realistic Level

Remember that the point of speaking your truth is to tell CB that you are resilient. That you are no longer being brainwashed by the shame voice that says you somehow contributed to the offence done to you, that it’s OK for your mother to manipulate you in this way because she had a difficult childhood etc etc.

The point is NOT to get the other person to change. Really, when have you ever changed another adult? When have any of us ever done that?

The point of speaking your truth is to set healthy boundaries. Other people are free to behave as they think best...but so are you.

#2 Game Out The Consequences of Speaking Your Truth

What could happen as a result of speaking up? What is the risk?

What might be stopping you here is that this could be an unknown. Uncertainty enters the ring. Things could get nasty.

Remember that CB was designed for just such conditions.

Whatever the downside, there are three powerful upsides that I bet eclipse the negatives:

#1 You show CB you are resilient.

#2 You train yourself to respond immediately future threats - because whatever happens as a result, you will survive. That speaking your truth is not dangerous. Therefore CB will see that you are really, really resilient.

#3 As a result of #1 and #2, CB will relax and you can actually enjoy your life. You create some mental space to change what needs to be changed.

Another potential upside in some cases is that you can forgive the person. There is so much toxic nonsense spoken in personal development about “just forgive”. In a hypnotherapy session once, the hypnotherapist tried to make me forgive certain people, some of whom I didn’t even know their name. It ate away at me for a long time afterwards. I finally realised that you need to help CB feel resilient in order to forgive.

How much anger and bitterness have you been nurturing towards certain people? Feelings that are only been kept alive by the fact that your boundaries are not healthy? By your silence?

#3 Game Out The Consequences of  NOT Speaking Your Truth

Things will certainly be easier on one level.

However, as regards CB, the opposite holds true:

#1 You show CB that you are not resilient, that someone else needs to do the job of creating your boundaries for you.

#2 You train yourself to believe that it is dangerous to stand up for yourself. CB thinks: OK, she cannot set boundaries. Cannot speak up. We must be in a really, really dangerous situation. I see that it is time for me to go into emergency mode and take over. She needs to be on alert 24/7. There’s no time for enjoying life. She might moan about how stressed she is, how her IBS has flared up again. Well, sorry lady, but we can’t relax when you have declared this state of emergency in your own life. A state of emergency that you cannot manage yourself.

(Is the picture I have painted in that last paragraph an exaggeration? It is based on my own experience. Only you can decide for yourself how far it resonates for you)

#4 Can You Get Some Advice/Support?

This is especially important if the arena for speaking your truth is your workplace.

Years ago, I worked in a special school. It was a very small organisation - I was 25% of the teaching staff. One pupil was regularly physically violent and my job there ended when he groped me one day. My line manager Chris’ boundary skills with this pupil were of the chocolate teapot variety - dismal.
After the assault I managed one day in this hell hole. The following day I broke down in hysterics and was sent home.

I went to the doctor to get signed off work for my resignation period. I will never forget his name: Dr Lee. I spent a total just 10 minutes with him (he was a locum doctor) but he is one of my favourite people ever. When I told him what had happened, he said: “Every single person out there in that waiting room, they would be reacting like you are. You have done nothing wrong.” I must have had to toxic shame written all over my face.

It was transformative to have a professional who didn’t know me support me like this. I did complain to the organisation that the school belonged to, and their internal investigation concluded that - surprise, surpise, I was a liar.

I tell you this story for two reasons. Firstly, getting outside advice and support can give you a big dose of courage.

Secondly, your situation may be really untenable. I was in a terrible state at the end of this job. I felt compelled to speak my truth by writing a letter of complaint, but I was not strong enough to take it further. The organisation is actually very well known for its rehab centres and I could have kicked up more of a fuss. But I genuinely was not strong enough, and the assault triggered memories of previous experiences.

Looking back, I should have walked out of this job earlier. I was genuinely in an unsafe position. This consideration trumps any Cavebrain work I might have done (had I been at that level of awareness, which I was not).

#5  Can You Make Yourself Accountable?

Who can you tell you are going to do this? Preferably someone that you can talk through the experience with afterwards.

#5: What is the best way to speak your truth? Face to face? Phone? Email? Social media?

Social media (SM) can be a tricky one. The plus side is that SM is one big gossip machine, and your truth can spread fast. The downside is as follows: it is possible that the only people who happen to see and comment upon your post are criticising it or questioning you, or a moderator asks you to delete it (their priority is group harmony). Your CB will interpret their comments as what the entire tribe thinks about your truth.

It is my belief that CB always prefers you to speak your truth in person, because that is the way it knows best (there was never any writing paper around for our cavedwelling ancestors). The other plus side of this is that you train yourself to stand up for yourself immediately for future times when you need to speak your truth. The les time between the offence you are speaking up about and your reaction, the better.

Also some difficult convos are much better done in person, where painful things are not recorded for either party to mull over.

However, I do not think I would ever have trained my courage muscle without being able to write letters or email. Written communication has sometimes been the only way I could manage to speak my truth.

While creating The BCP, I had the opportunity to feel the fear and speak my truth anyway. I recorded this audio for you as I hope it might inspire you to do the same. Interesting results, to say the least!

If you cannot play the audio, please copy and paste this web address into your address bar:

(Make sure to add www. at the front)

NB This is very, very silly 🙂