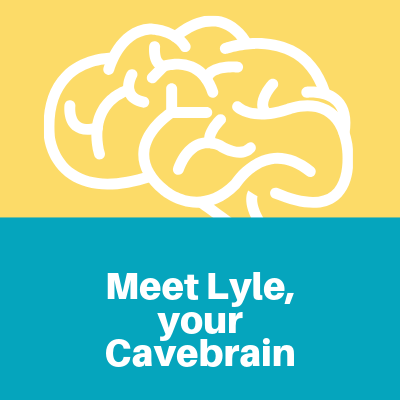 You thought Cavebrain was hidden in the deep dark depths of your brain, didn’t you? That we can only guess at its intentions via educated guesswork?

What if I told you we have a interview with Cavebrain?

More accurately, this is the story of one man called Lyle who has let Cavebrain completely take over his entire personality. We hear some gems from Lyle himself. My personal favourite is is his vigilance button.

First of all listen to the story here:

Next, scroll down and we will discuss everything you hear.

#1 How is Lyle symbolic of Cavebrain?

Lyle sees his wife as naive for not being as hyper vigilant as he is. “I know best” is his attitude to her holiday.

This is parallel to the way that Cavebrain will mistakenly see the pressure of a job interview as a life threatening event, or take the rejection of a small group of people (say the interview panel) as a signal that your place in the tribe is not secure and, depending on how disconnected you feel from those around you, that your personal security us at risk.

I thought this story was hilarious, and initially had nothing but contempt for his over-zealous and patronising attitude to his wife.

Protective Fat Suit. CB knows that in nature, the bigger you are, the safer you are. I was on red alert 24/7 after several abusive experiences in my childhood, because CB had not processed them. (See this episode on Me Too for more on this). The fat suit was protection from a threat that was long gone.

A very important one, is the answer to that question.

I’m sure you will have laughed out loud at the trick she played on her husband when he called her on holiday. She wanted to catch him enjoying the apparent disaster she is making up, then knock down his fears.

This woman is the perfect role model for managing your CB. She knows how ridiculous Lyle’s fears are and goes on holiday regardless, having the time of her life in Mexico.

It is time for you to start challenging your CB’s irrational fears.

Body Hatred
The She Looks Great/ I Look Great exercises felt forced and artificial when I started them, but I knew that CB will accept anything once it knows that it does not represent danger for you.

Giving Up Sugar
When I got a craving, I would see it as part of a quest to reclaim my life, rather than a you-must-be-good test. I did whatever I could to walk away for just five minutes. That process, repeated over and over, leads to CB accepting that it is safe to walk away from the dessert aisle and it becomes much easier.

Toxic Shame
Shame is bound up with your position in a tribe. Once I had worked out that my world is composed of multiple small tribes, it became much easier to stand up to situations that used to trigger toxic shame in me, and strengthen my place in different tribes.
................

I said to myself: You are being ridiculous. I carried on.

Of course, there can be danger in any situation. During this project we will be learning about developing resilience rather than seeking 100% cast iron guarantees of safety for CB.
The point here is that CB had been confident that the woods represented certain danger. I challenged it with the very real possibility that on that day they were actually peril-free.