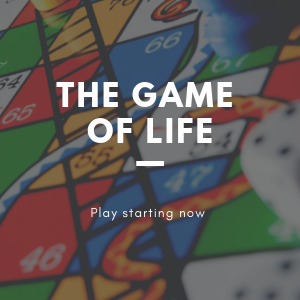 The Game of Life

This is a condensed written version of the above audio:

This is a thought exercise. If you enjoy it and feel that you are getting something out of it, I invite you to use it as a way to handle problems such as anxiety, depression, as well as financial, relationship and health issues. If you do, you can start to see some pretty amazing differences in these areas, depending on how willing you are to challenge your present way of thinking and your desire to experiment.

Let’s start here: If you and I both looked at the colour blue and we both agree that it is indeed blue, how do you know that what you see as blue is what I am looking at?

The answer is that you don’t.

Therefore the best access we have to reality is our own perception. I can never get in your head and see through your eyes and vice versa.

To expand the point, the best access we have to our entire experience - meaning what we see around us, the meanings we deduce from others’ words to us, the interpretation we put on any event - is our own perception.

Imagine Life Is a Game

I now invite you to imagine that you are living in a simulation. You can see it how you like: perhaps as a video game, or a dream you control. Because I am not into video games, and I never remember my dreams, I like to think of a kind of Game of Life (but much, much more interesting than the board game of the same name). Or as sort of a ‘semi- improv’ film where the script is being written as filming progresses. In fact I have conceptualised it as a mash up of a game and a film.

I will refer to it as The Game from now on. Change that if you like for your own purposes.

You are the main character in The Game. Everyone else around you is other characters - some major, some minor.

There is a game controller, or executive producer if you like the film analogy. I decided to name mine - she is called Mimi. (If you do this, I suggest you name them as someone of your gender - I will explain why later).

Just as in any good film with a decent hero/ine’s journey, the whole point is that your character grows and gets stronger throughout The Game. You do this via all the challenges that Mimi presents to you.

Now, most people will tell you that life is a struggle, even if they are trying to put a positive spin on things. And it certainly feels like that when you feel overwhelmed with work, your marital problems, debt or worry about x y or z.

But what if all these issues were really Mimi offering you challenges and plot devices to enable your character to grow and become more interesting?

Imagine you had Mimi’s job. Your main character is called Sally. Sally’s goal is to double her income. But you see they cannot manage what they have right now. Therefore you keep giving Sally challenges such as running out of money a week before payday and not being able to afford a birthday present for their best friend in order to get them to start budgeting before you introduce any opportunities to increase their income into The Game.

Now what will Mimi do if Sally responds to these money management problems by moaning or buying a get rich quick course online ? Why, Mimi is going to just keep offering her more of the same challenges.

Now, imagine Sally is reading this article. Apart from exclaiming “Harriet, are you psychic or what?!?” she could decide to accept Mimi’s challenge, grasp the budgeting nettle and live within her means. Result: Mimi is delighted and next week, while Sally is chatting to an old friend,  finds out that this friend needs someone to do some extra copywriting for them, something Sally can do standing on her head.

Sally gratefully thanks Mimi for rewarding her for accepting the challenge, does a sterling copywriting job and starts looking for more lucrative income opportunities, especially ones that feel out of her league.

Are you thinking: Nice story, but so what?

Are you thinking: Yes, Harriet, I get that imagining you are a main character in a film or game helps you feel more positive, but it’s not going to make my friend ring me up and offer me some work just when I need it most, now is it?

And my answer to you is: Well, actually...yes it can. Or something else equally exciting.

This is where those of you with fixed mindsets will leave. Bye then!

If you are still reading, let me assure you I am not trying to sell you into believing that you can control reality.

But I know that you can control your perception of reality.

Something I DO want to sell you into is experimenting with gamifying your life.

There is definitely something mysterious at play here. Both I and others I have spoken to and worked with have experienced their reality shifting using The Game of Life. I cannot explain it - nobody can. But I have experienced it.

Here are some examples:

*Changing my focus about the father of my children from thoughts such as Why won't he do X Y and Z? He's so immature!... to... the thing about him is he really loves the kids . Within a couple of weeks of doing this, he messaged me to  say he wanted to have the kids more over the holidays, something we had argued about not long before (me complaining he never saw them enough).

*Writing myself a £4,000 cheque as an exercise in practising handling more money - and the following week taking on client work that totalled £4,000.

*Writing down the affirmation “I allow myself to have a relationship” after over a year of being single - on the day I was going on an online date. The date was really nice but never beyond coffee. Because I went on that date I missed a meetup to see a Queen tribute band. 5 days later I went out and met a man I ended up having a wonderful relationship with. He told me he had been at the Queen tribute meetup when I had been on the online date!

*Having the thought that I needed to make peace with someone I had fallen out with, ignoring it, then a few days later hearing those very words at a talk I attended. Following this I realised Mimi was serious, so I met up with the ex-friend. We didn’t exactly make up, but it was a wonderful boundary-building exercise where I spoke my truth. Immediately he stopped being so important to me and my stress levels divebombed. The following week, I received an apology from him about what we had fallen out about. He is now a non-player character in my Game of Life and I feel much better about the shelf life that some friendships have.

Could You Be Wrong?

Now if you are feeling pain in any area of life, I want to suggest to you that instead of accepting that your perception of the problem is 100% objective fact, that it could be 100% subjective and unique perception.

We have all had the experience of realising we were wrong about someone else’s intentions (the day they forgot your birthday, when in fact they were worried sick about their child being bullied).

Could we be wrong about our whole experience of reality?

I cannot prove to you that you are living in a dream world or that everything you experience is a simulation. However, you cannot disprove it.

Are you arguing with me in your head now?

OK, go on. Please disprove the above statement. Prove to me that everyone else exists as people with free will of their own, rather than as other characters in your dream world or simulated game.

You cannot, because you have no access to their perception.

Now, before your brain fries itself to a crisp with the cognitive load, I am not trying to sell you into believing you are actually living in a dream world or simulation. Remember, this is just a thought exercise.

All I want to do is to get you to question your assumptions about reality.

How To Play The Game of Life

This is all extremely challenging at first, because it goes against everything you have been taught to believe.

So right now I want you to play with this idea that life is a game.

Here are some ways you can do this:

#1 For any problem, imagine your controller/exec producer has put it into the game to make your character stronger so s/he can have a better game, do more interesting challenges. Ask yourself: if this was a game or film, what hidden benefit to my character's growth does this challenge present?

#2 Ask yourself: if this was a film and you were watching it, what next plot point would make the most interesting story as regards this problem?

#3 If the above questions feel too challenging, look back over your life and journal about all the blessings in disguise. What did you gain from that horrible boyfriend or girlfriend who treated you badly? What did you learn from certain choices that you would not make today? How did that terrible job back in 1998 motivate you to do better? And so on.

If you keep trying to see life as a game - even if your get brain drain within a few minutes - you may well see things around you start to change.

You have nothing to lose. If this is all nonsense, you can go back to the grind of life is a struggle thinking anytime you like.

The following audio is me talking myself through one time when I was really angry and how I used this approach to manage my emotions. This is one continuous unedited audio. My thoughts are more off the cuff and less organised than on my podcast.