This weekend I went to see Fantastic Beasts and Where To Find Them. (Don’t worry, this post is entirely free from spoilers). As we were coming out of the cinema, one of my friends commented “I really like what they did with the fat guy”. See if you can spot him here in the trailer:

She was talking about Jacob, the Muggle or ‘Nomag’ (as JK Rowling has american wizarding folk call them in this universe) who gets caught up in the main character’s adventure.

Now Jacob is indeed overweight. But here is the really revolutionary thing: it doesn’t matter.

His size is empty of meaning.

Jacob is very much an ordinary working man, slaving away in a canning factory. Sure, he wants to own a bakery, but you get feeling his dream business could just as easily have been a music store, a bar or a tailors.

His function in the film is very much as the hero’s sidekick who sometimes helps, sometimes inadvertently hinders, that hero’s quest.

It would have been so tempting for the casting director to follow the cliched formula fat = bumbling. Fat = socially awkward. Fat = stupid. Fat = ruins it for the more suave, capable hero. But Jacob is none of these. He is an introvert, but not half as shy as Newt (Eddie Redmayne), the painfully shy main character who can barely meet stranger’s eyes. In fact, one of the most striking features of the film is that virtually all the characters are introverts. I am struggling to think of another Hollywood blockbuster that I can say the same about.

Is it good to strip fat of its meaning? Yes, when that meaning is one-size-fits-all uniform, unhelpful and heaps even more toxic shame on people than they are already carrying: they hear ‘you lack self-discipline, talent, intelligence, self-care and ambition’. Result: their excess weight becomes the externalisation of their self-loathing.

This is where this film has created a bit of real life magic in our Muggle, Nomag universe. Because the first step to better body confidence and indeed navigating the process of shedding weight is to make fat devoid of any uniform meaning. In the same way that financial freedom is not symbolised by a ferrari for many of us, so fat has completely unique significance to different people.

Because make no mistake, it IS deeply meaningful. Your fat has a highly individual function that is probably deeply buried and invisible to you. For myself and my clients, uncovering that meaning has created a ceasefire in the war they’ve been waging against themselves for years.

Because somewhere in their mind that function was positive. It comes as a huge surprise for people to realise that they are not 100% on board with the idea of losing their fat, that an invisible force is rebelling against their conscious health goals. I call this force Sabotage You.

You’ve met her before.

Of course you have.

In the deli aisle.

She is the one leading that 11pm fridge raid you’d rather forget about.

She refuses to accept compliments people give you, ordering you to downgrade them with “No I don’t” and “Well, black is very deceptive to they eye. I’m actually much bigger than I look”.

Until you get to know your Sabotage Self and understand her secret weapon – that she is misguidedly trying to help you with all these vicious put-downs and unexpected binge eating episodes – you will always buy into the uniform meaning that Hollywood has ascribed to fat.

So get curious. Sit down for peace talks with your Sabotage Self. Once you know what she wants, you can tell her there are other ways to get it. And then tie her shoelaces under the table while you make your gettaway and reclaim your life.

If you are interested in starting this life-changing process, start by taking this eating assessment today. 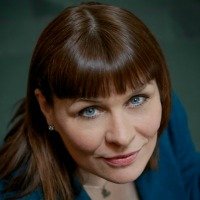 fantastic body image and where to find it
harriet