Are Eating Problems Just An Excuse?

– and why it’s not that simple

“She just refuses lose the weight!” 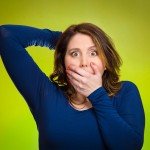 These all-too-familiar words were posted in a comment thread on Facebook. It doesn’t matter who said it, or about whom. The message is always the same: shedding weight requires effort, and this fatty here is just lazy. And obstinate.

If I had been talking to the person who posted this I would have said what I always do in these situations:

At this point most people are struck dumb by this statement. They might mumble “tell me more”. However this woman surprised me by retorting “Nonsense! There are no excuses for overeating.”

And I have to say she is right.

And incredibly wrong at the same time.

So let me present my two – apparently contradictory – arguments

ARGUMENT #1: TO SAY YOU HAVE AN EATING PROBLEM IS TO MAKE EXCUSES
Recently two people whose work I admire passed away within the space of a fortnight. On the surface, they had nothing in common.

Scott Dinsmore was 33 and founder of Live Your Legend. He mission was to help people change the world by doing the work they love. A very successful business and a hugely popular TED talk under his belt, his life was cut short in a climbing accident.

Oliver Sacks was 82. The neurologist’s work was the basis of the film The Awakenings (starring Robin Williams and Robert De Niro) and the book The Man Who Mistook His Wife For A Hat. He died of liver cancer.

You look at Scott Dinsmore and straightaway get the tragedy of his death: unfulfilled potential. Your second thought is: Bloody hell, I’m lucky to be here – we could all get run over by a bus tomorrow. How can I live my life to the fullest?

I heard about Oliver Sacks’ death the day after I heard about Scott’s. My first thought was “Well at least he lived a long life” (I have lost people decades younger to cancer and I just can’t help thinking like this). This was swiftly followed by “And what a meaningful life it was too”. Sacks seems to be the perfect living-life-to-the-fullest role model for us when we are searching for ways to up our game.

This was before I listened to an interview he gave months before his death (link below). In it he describes how his mother responded to finding out he was gay: “I wish you’d never been born”. This affected him deeply and as a young man, only approached two potential romantic interests, both of whom turned him down. He only found love at the age of 77 – five years before he died.

I don’t wish to downplay Sacks’s incredible body of work – his life changed countless others. But his personal life was a true tragedy. Very few of us will have all the adventures Scott had, but most of us find love a long time before we get our bus pass.

Dinsmore’s untimely death has a lot to teach us – stop making excuses and start living. Sacks’ unfulfilled love life adds another layer to this – truly living does not need to be climbing mountains or doing TED talks. It can be understanding that your deep fears and shame can be dismantled. That a nasty and cruel comment from your mother is NOT the basis for low self-worth.

What has any of this got to do with the statement that eating problems are just an excuse? In my work helping people with binge eating and compulsive behaviour around food, one thing is clear to me: the client thinks the food is the problem, when in truth it is actually a tool by which they express their low self worth, shame, need for protection and so on. It is easier to focus on their bingeing than the emotional hell that the bingeing is covering up in their mind.

And now let me argue against what I just said…

ARGUMENT #2: WHY EATING PROBLEMS ARE NOT AN EXCUSE
“Excuse” is a nasty little worm of a word. It implies laziness. Dodging responsibility. What-can-I-get-away-with-ism.

It implies that the person focusing on their eating problem is making a conscious choice, like they are saying “this is the easier option”.

First of all, people who eat compulsively are generally NOT making a conscious choice. When I say to people that I believe the main reason many people overeat is for protection, I generally get a surprised nod of the head and a silent “Oh”. Nobody ever thinks that their apparent hellish problems actually have some (usually misguided) positive function.

Secondly, it is NOT the easier option. I can speak with authority here, having made both choices. I spent 3 decades as a food compulsive, covering my need for protection with my bingeing, my sugar addiction and being a too good girl. Turning 40 was my big NO MORE! moment and I decide to sit down with the devil in me and dismantle this thing that was quietly ruining my life, and diminishing me more than I could know.

There have been times when the pain of seeing my eating problems for what they actually were – and what they were really expressing – was very sharp. That was not easy. But when I compare the two years that the really deep soul mining took to the previous 30 where I was steeped in invisible self loathing, I would pick the soul mining again in a heartbeat. This is not to mention the freedom to live the rest of my life as a powerful adventurer, one who actually likes herself. I’m 44 right now, but I feel twenty years younger.

So, Harriet, get off the fence: you can’t say that eating problems both are and are not an excuse.

OK, here’s what I REALLY think: eating problems are a cover story for deeper issues. But not a conscious cover story we have sat down and created with self-awareness. They are invisible cover stories, created under the radar of our conscious minds, for what seem like very sound reasons.

The work here is to uncover what those cover stories are and then dismantle their power. The protection people seek via their expanding waistline is no longer necessary – but it takes work to get that truth to sink in.

This, for me, is what it truly means to live: dismantling the illusory power eating has over your life.

* How to turn your self sabotage on its head

* What mood hijacker foods are

Just let me know where to send the videos: