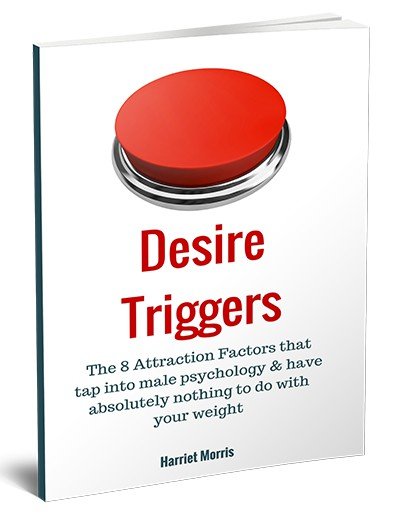 Today's date is for you if you are in a relationship with a man or are looking to date one.

A few years ago, I wrote an eBook called Desire Triggers for my female clients. The aim is to get women to understand that there is so much more to what men find attractive than the beauty magazines would have us believe.

This is not something I have ever put out publicly.

NB- in this book I talk about the relationship I was in at the time I wrote it in 2016. That has finished now, but we are still friends (a feat I have not managed with my ex husband).

What To Do On This Date

Read the extract below from Desire Triggers: 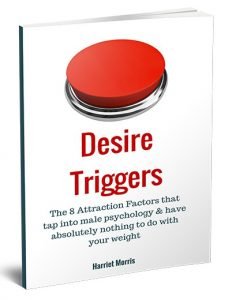 If either of these thoughts have ever popped into your head, then I have news for you.

I am going to show you (through simple evolutionary psychology and some powerful reframes) that male attraction is far more multi-dimensional, individual and complex than the stupid equation thin = attractive.

We are going to take a look inside a man's mind to see what really fuels his desire. The truth is that slenderness is just one attraction factor for men - and not all men. If you have more curves than you find comfortable, there will be men who find this off-putting - and plenty who do not. I am not going to rely on some wishy washy 'let your inner beauty shine through' nonsense. The body shame that has infected our culture is far too powerful to be dismantled with mere wishful thinking.

You need evidence that the thin = attractive equation is about as accurate as the idea that the earth is flat. The earth does indeed feel flat to you as you walk around it because you are only experiencing a tiny part of our globe. Most people have fallen for the thin = attractive equation as THE TRUTH because it is true for some men some of the time: a tiny part of a much bigger truth. It is a lazy shortcut to the deep primal desires that drive all heterosexual men. When I show you the other desire triggers, it will be like showing you a video or photo of the earth taken from space. "See, there's more to this than meets the eye" I patiently explain.

This book is the equivalent of me not just trying to get you to blindly believe the earth is round, but showing you evidence. This is that photo from space that your body confidence needs.

What Are Desire Triggers?

Desire triggers are factors that increase a man's attraction to you. As I have mentioned, slimness is only one such trigger - and it is NOT universal. Once you understand the other triggers, you can start to feel more confident around men because you will see how powerful these triggers are. It's like a beautiful empowered buffet of fun strategies. You definitely won't turn every man's head, but you will get more attention than complaining about your fat stomach can ever give you.

Out there in the real world these triggers are guidelines - one man may be more affected by one trigger than another. You will start to see each man as individual, and so start being able to honour your own uniqueness. Whatever desirability shopping list any man - or any woman, for that matter - has in their head, when we fall for someone, we fall for that unique individual.

This is really a combination of the two triggers of validation and perceived challenge that we have already discussed. It is also a very rare skill that I hardly ever see women get good at, and so I believe it needs highlighting. Just as handling the clutch is useless if you cannot also manage the accelerator at the same time while starting your car’s engine, so being able to validate a man's attractiveness should be combined with high value behaviour.

When you put this magic combination to work, you show a man that you are attainable and therefore put him into a bit of a ‘Me Tarzan’ state, but you increase your perceived value in his eyes.

I see a lot of women who are very good at being cynical and setting very high standards for men before they have even met them. This is always a reaction to previous hurts, and spells disaster for any man hoping to validate himself with such a woman. And that dent in his confidence can in turn often spell disaster for any attraction he may feel for her.

In this scenario, she is basically asking the next man she meets to make up for the pain that her last partner, or partners, have caused her. In fact, I wonder whether focusing so intensely on the thin = attractive equation is easier to do than to face the fact that she wants any future partner to atone for the sins of his predecessors.

I digress. Anyway, back to the magic combination of validating a man as attractive, being whilst showing your standard. You give him hope, but also communicate that he has to earn you.

If you are standing waiting to get a drink in a bar, or have just been introduced…..